The Man in Red

Appearance – Klarion takes the appearance of a pale-skinned teenaged boy with long, thin limbs, a thin neck and an angular face. He has black hair in a mop-top style with V-shaped bangs and devil-horns rising over the ears. He has arched eyebrows and sideburns that taper to a point. He also has long, sharp, black fingernails. When feeling particularly wrathful or malicious, he may take on more demonic attributes, such as bluish skin and beady red eyes.

His clothes are formal. He wears a black skinny tie, black skinny trousers and pointed shoes, as well as a distinctive jacket over a white shirt with a tall, stiff collar. The jacket resembles a standard suit jacket around the chest and shoulders, although it has long sleeves with flared, pointed cuffs, and the jacket's skirt is similarly long (mid-thigh length) and shaped so that it comes to a point at the front. The jacket is fastened with two short button straps around the waist. 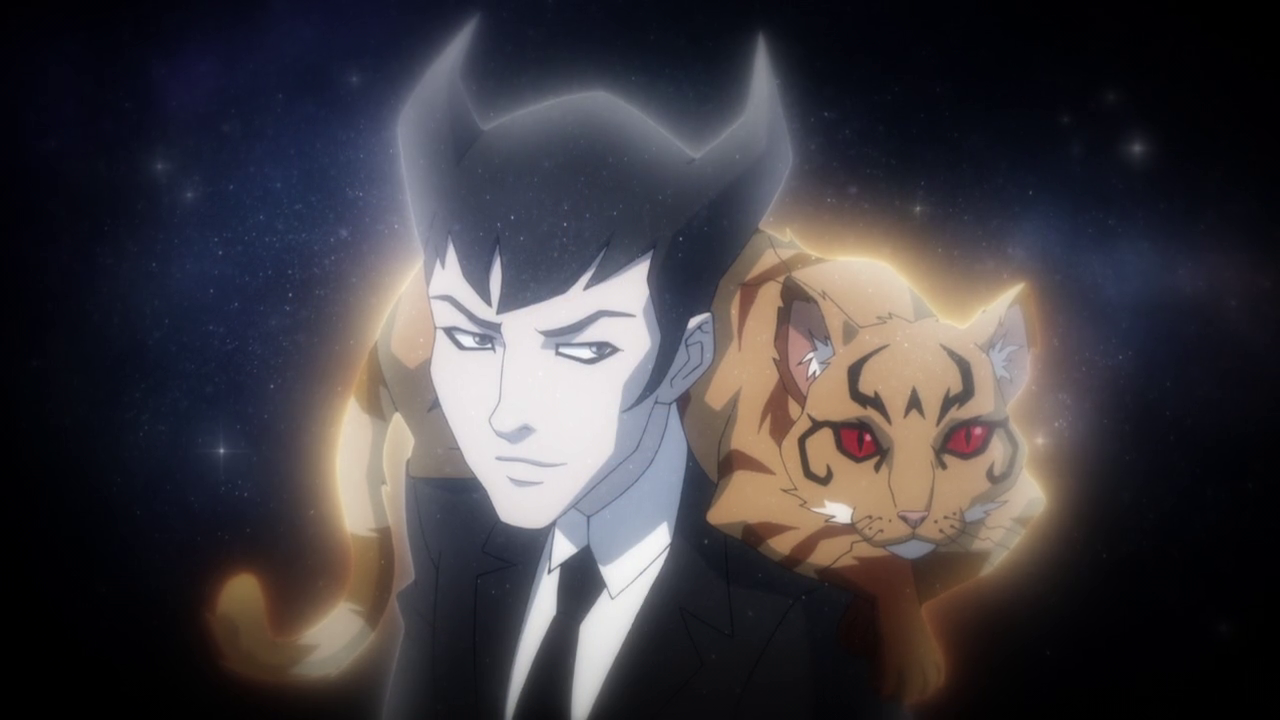 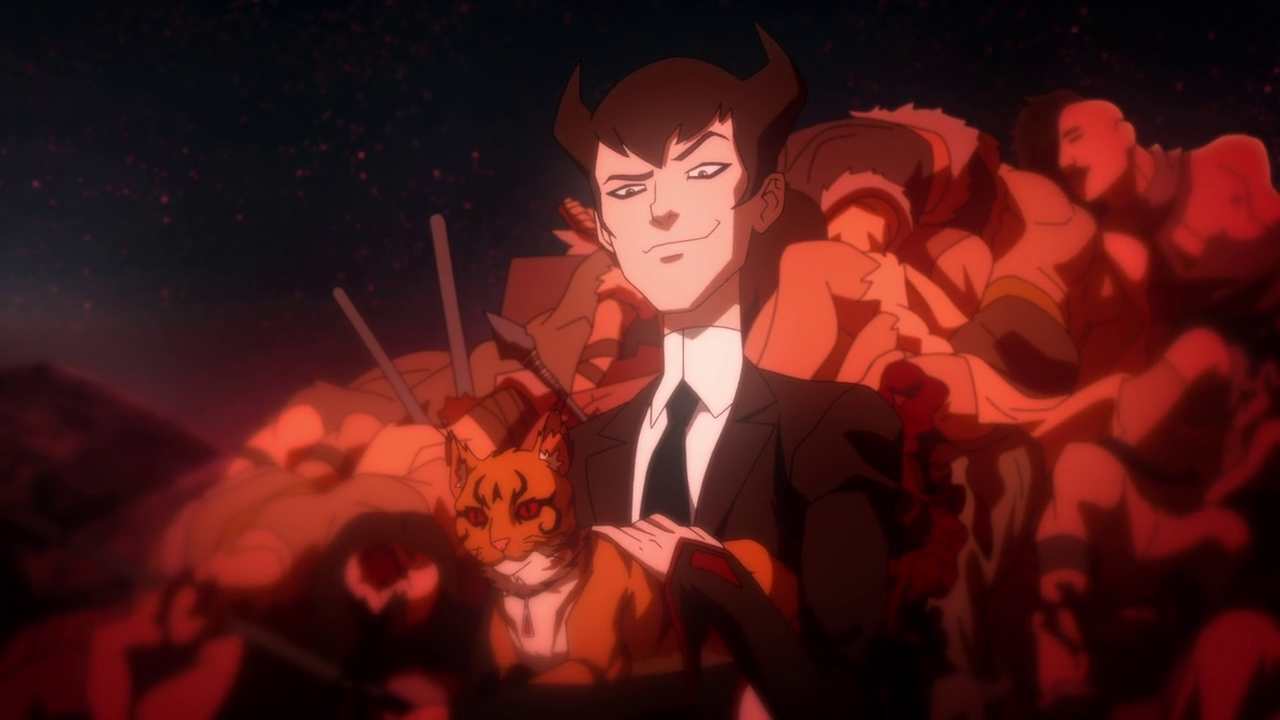 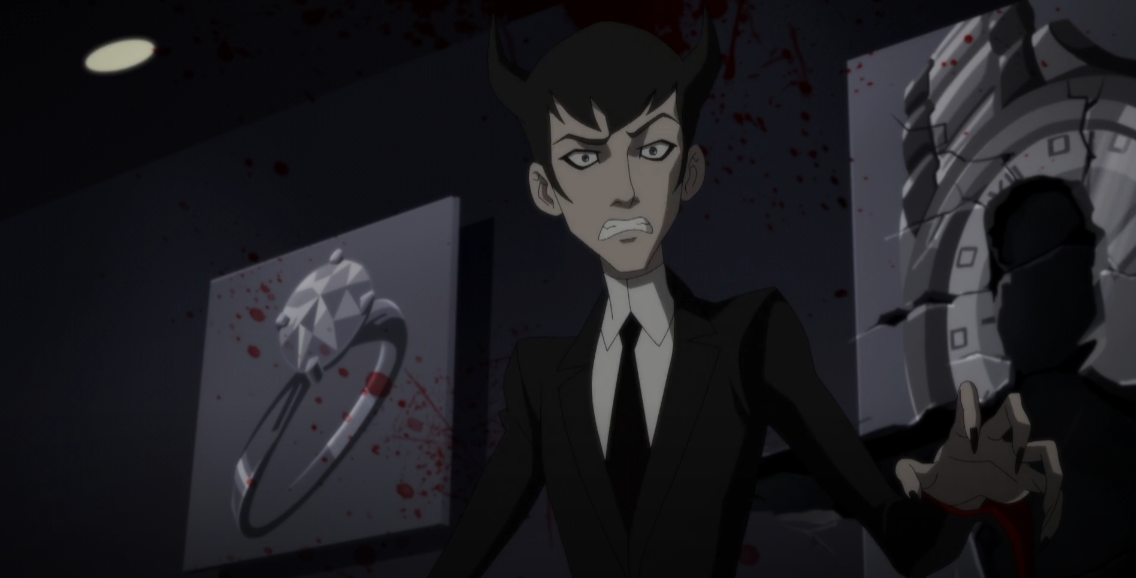 Personality – Klarion acts like a spoiled brat much of the time and is overall impulsive, cruel, and spiteful. He takes great pleasure in causing mischief and making the lives of those around him unpleasant. Driven by a need for immediate gratification and his own chaotic nature, Klarion’s loyalty towards his allies is mercurial at best.

Were you expecting some kind of redeeming factor here? Klarion whines. He throws tantrums when he doesn’t get what he wants. He’s immature and finds destruction, disaster and chaos amusing— in fact, he wants to be actively involved in it! There’s no underlying trauma to explain this behavior; he is simply not a mortal creature and doesn’t think like one.

Possible Reactions – If confronted by multiple aggressive persons, Klarion will stand and fight, but definitely isn’t afraid to cut his losses and run if things look really dire. He cannot be intimidated by most mortal creatures, only feeling actual fear when confronted by truly powerful foes. When faced with a clearly sinister person who wishes him ill, Klarion will push all of their metaphorical buttons, acting smug and being a general nuisance— his idea of playing nice. Those who are nice to Klarion will likely be regarded with befuddled amusement, since he isn’t accustomed to positive feedback. Potential allies might have some luck in trying to “redirect” his chaotic nature to something more “fun.”

Relationships – In general, the only living creature Klarion gives a fig about is his familiar and cat, Teekl. He might ally with others if it means surviving, though. His attitude towards adult characters will probably be mostly irreverent in typical teenager fashion, and he’s definitely more willing to collaborate with children/teens just due to them being more on his maturity level.

Aquarius - Klarion considers him to be a boring loser stuck in the past, which is just hilarious in an embarrassing way. That being said, he recognizes that this automaton could probably murder him if given the chance. Would definitely avoid and try to actively escape his notice in the actual event, but mock relentlessly if an encounter must occur.

Sand Hawk - Funny and chaotically entertaining. Better yet, he royally pissed off Aquarius. If there was ever an adult Klarion looked up to, it would be this guy.

‘Combat’ Style – Klarion is accustomed to standing back and letting his magic do the work for him, so he will naturally seek to put some distance between himself and any attackers. Much like his beloved feline familiar, he’ll gravitate toward hanging out in the shadows and try to be stealthy as he moves about his environment. He is also immortal, so he isn’t too scared of dying, but experiencing physical pain is still icky and weird so he doesn’t relish getting injured. Thus, he will absolutely fight tooth and nail to get out of a bad situation if he’s trapped in a close quarters scuffle.

In most cases, Klarion will let his allies fend for themselves or run interference, but he’d happily take the opportunity to stab an enemy in the back while they’re distracted with disemboweling a friend. The majority of downed enemies will be killed without a second glance, but a particularly annoying foe might earn a heinous, drawn-out death.

”There is simply nothing more chaotic than the average housecat.”

A nonverbal, instantaneously cast spell that grants Klarion certain feline attributes with inspiration from his familiar, Teekl. With a simple hand gesture, the witch boy’s appearance undergoes several subtle changes. His eyes gleam faintly yellow with slitted, cat-like pupils, and his ears, fingernails, and teeth adopt a pointed look that is far more noticeable than his usual sharp appearance. As a result of this spell, Klarion is able to nimbly dodge most attacks, move with sudden, surprising bursts of speed, and in general has an improved reaction time when it comes to danger.

Unfortunately, the effects of this spell are somewhat outside of Klarion’s control, and his behavior grows far more chaotic as a result. It’s almost as if his agility and speedy reactions function on autopilot— he might overreact to something as simple as a leaf blowing in the wind. In addition, his mental state becomes decidedly more cat-like, prey drive and all. He will grow restless around dawn and dusk, driven by a nocturnal hunter’s intuition, and overall develop an enormous urge to hide, skulk, and prowl in the shadows. He will also form opinions about people/things that might not be entirely logical.

A talent inherited from Klarion’s feline familiar, Teekl. Klarion has a faint and completely apathetic understanding of how to track most anything under any conditions. He can usually identify when some creature has passed through an area, and in general can pick up on subtle environmental cues that might indicate if someone is nearby or long gone.
Extra – An important thing to remember about Klarion is that his brain is literally chaos personified. He remembers things out of order, makes bizarre comments, and is generally not all there. He can also be pretty damned terrifying when he’s not busy throwing a tantrum or acting like a spoiled, snide teenager. Most importantly, his knowledge of the modern world is questionable at best. He would be able to figure out certain modern weapons after some trial and error, but not fully understand how they work.

These are some general dialogue tips for Klarion, though these rules obviously won’t always apply.

“Oh, fine time for you to be knocked unconscious by an elephant. Now I'm losing grip of the mortal plane.”
“You've got a lot of nerve, kid. You're a stage magician, and I am a Chaos Lord. Now, what brave punishments can we devise for little Miss So-not-a-thing?”
“Give it up, Nabu! Order went out of style in the 20th century.”
“They sure don’t make evil, immortal sorcerers like they used to…”
“Dang it! Now I’m just a flaming diamond careening through time and space.”