Father Gascoigne is a Daring Hunter. When not consumed by his bloodlust, Gascoigne is a gallant and soft-spoken man, fighting monstrous beasts in a daring bid to protect those he holds dear… and he does believe he will meet those dear ones again, in this strange new universe. In addition, Gascoigne is unhealthily dedicated to the hunt, and his thirst for blood keeps him… distracted, often requiring something to draw him out of the crimson haze. It may very well consume him again, one day.

Father Gascoigne is an exceptionally tall, middle-aged hunter. He has pale skin, silvery grey hair, and commonly covers his eyes with a cloth blindfold. He has numerous scars across his body from the hunt and a decent amount of shaggy facial hair-- despite his priestly clothing, he appears rather unkempt, especially after a long night of killing beasts.

He commonly wears a thick, layered Hunter’s garb, which essentially boils down to a long and leathery dark coat, a wide-brimmed cap, and a sturdy pair of boots. He also wears a holy shawl around his neck, the tattered material serving as a testament to Gascoigne’s prolific hunting. A pungent beastly smell tends to hang about him wherever he goes, only somewhat mitigated by his censer pendant. 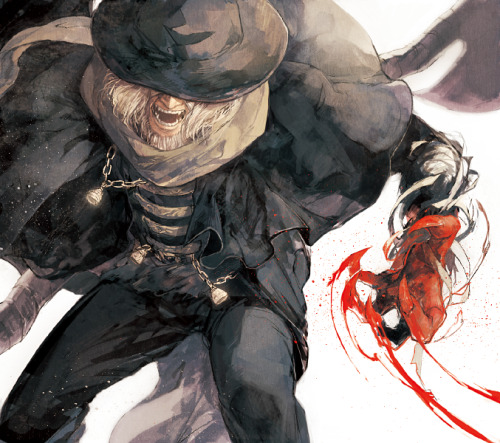 
Father Gascoigne was a hunter of beasts operating in and around the city of Yharnam in the world of Bloodborne. Coming from a foreign land, Gascoigne would eventually join the Healing Church hunters to take on the onus of the hunt. Upon joining the Church as a hunter, Gascoigne was partnered with Henryk, an older hunter. The two made an effective duo, and at some point, Father Gascoigne took a wife by the name of Viola and the pair had a child.

As Gascoigne continued to hunt, he began to be affected by the bloodlust, even forgetting his family. Viola was known to play a tiny music box, a memento of theirs, in order to draw him home when he had been out all night and to make him remember her and their daughter when he began succumbing to the bloodlust.

But no matter their pasts, beasts are no more than beasts. Some choose to take up their axe to play the part of the executioner. Gascoigne hunted each night, and eventually he began to fall apart, until one day he didn't come home.

Racing against time before darkness overtook the land, Viola went out to find her husband, leaving her daughter to look after the house. What happened next was unclear. It is very probable that in her haste, Viola forgot the music box and without it, Gascoigne was unable to recognize her, turning on and then murdering her.

Drunk on the blood, Gascoigne had lost the ability to differentiate between friend and foe, hacking away at corpses until another hunter approached him. Their ensuing battle revealed just how far down the path of beasthood Gascoigne had traveled. He eventually completed the transformation into a scourge beast, finally letting go of the willpower that bound him and revealing his "true form". In his final moments as the hunter slew him, the dying beast could be heard screaming “forgive me,” as if remembering all that he had done…
Strangely, this was not the end for Father Gascoigne. As if some force of the cosmos had taken pity on him, Gascoigne awakened in another universe shortly after his death. Finding himself in an icy, dank cavern, his clothes tattered and a fair amount of bloodlust still surging in his veins, it was with glee that Gascoigne dispatched the first corrupted thing to cross his path, the miserable, malicious creature seeming almost... beastly as it fell under the blade of his axe...

Gascoigne is an incredibly strong hunter, not at all weakened by his powerful lust for blood. His bare-handed strikes are the equivalent of being struck by a speeding car; even with a sturdy defense in the way, his blows can cause an enemy to stagger. He is also capable of lifting up to 200 pounds/90kg, his endurance and resistance to pain being at such a level that not even losing a limb is likely to slow him down for long.

Gascoigne has been hunting beasts for a long, long time. Even at his age, he still has refined dodging skills on the same level as a professional athlete. He is also able to employ short bursts of speed during combat, charging toward opponents at up to 45 miles per hour/72kph.

A leathery and dark set of garb, complete with a cap, coat, gloves and trousers. The protective effects are always ongoing since it is unlikely Gascoigne will change his usual hunting attire. As such, a foul stench of beasts and blood clings to these garments. The hunter’s garb also lends some resistance to poison, heat, and cold.

Gascoigne’s senses are heightened to aid him during the hunt. He can acutely detect traces of blood or other signs of his foes from up to 300 feet/91m away.

”One of the trick weapons of the workshop, commonly used on the hunt. Retains the qualities of an axe, but offers a wider palette of attacks by transforming. Boasts a heavy blunt attack, leading to high rally potential. No matter their pasts, beasts are no more than beasts. Some choose this axe to play the part of executioner.”

An axe with two forms. One form is that of a simple axe-- it can be swung as such to deal damage to foes at close range. However, the grip of this axe can extend, essentially transforming the weapon into a mighty halberd. Both forms deal heavy amounts of damage when wielded by Gascoigne, and each is rather effective in tight quarters or for warding off mobs of beasts.

"Pistol made at the workshop, for hunters stalking beasts. Hunter firearms are specially crafted to employ Quicksilver Bullets fused with the wielder's own blood, boosting damage against beasts."

A powerful pistol loaded with quicksilver bullets. It has a relatively high fire rate and is useful against fast-moving targets at range, but requires the hunter to pause and take aim. Must be reloaded after every use.
Survival (Beast Hunting) Rank 6 (300E)

Descriptor: Gascoigne is an experienced hunter of beasts, skilled in tracking, attacking, and slaying them. He can do so over most any terrain with little trouble, aided by his enhanced senses.
ITEMS:​
N/A
RELICS/TRINKETS:​
N/A
N/A
THREADS:​
​
Thread Title: A Queen, a God, and a Mollusk
Location: Inverxe
Thread Status: Closed, complete.


TIPS FOR WRITING WITH ME:​
Hello visitor! Welcome to my chosen character Gascoigne's profile. You can call me Jade and my pronouns are she/her. I'm a college graduate with a degree in Writing studies and a passion for ducks, writing, and baking. If you'd like to write with me, just look at my list of threads above to see if one says "Active, Open." If so, feel free to PM me here or find me on Discord (my username is Jade Duck on the Multerra Discord). In addition, if you're looking for writing advice or someone to proofread your work, use the same methods listed above. Thanks!