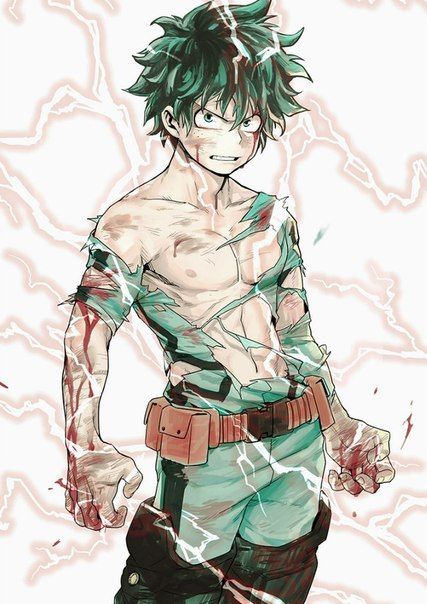 Midoriya is a tactical fighter at heart; this mostly stems from years studying heroes and what skills and strategies they used to perform their job. When in combat, he often is trying to create a myriad of complicated plans to take down his enemy, sometimes to the point of overthinking.

Midoriya is also a tank, relying on his newfound physical brute strength to give him the upper hand once that plan is created. He focuses on punches and kicks -- and his ability to deliver them quickly and efficiently -- to take his opponents down and defend others from harm. 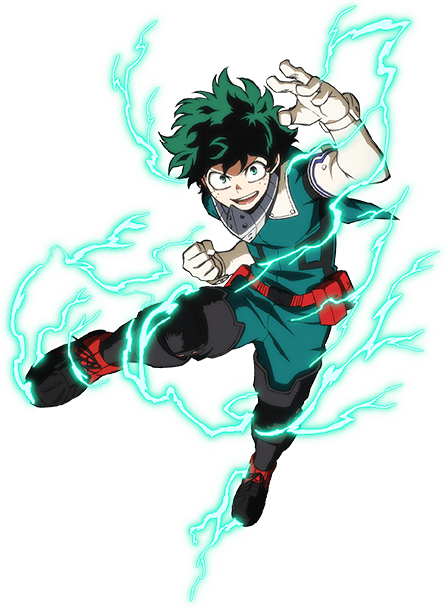 At first glance, Midoriya is a slight boy. He is small-framed, standing at only about 5'4" tall, but has been in intense physical training for months that has allowed him to tone his body and strengthen his muscles. His face is round and cute, pale with emerald green eyes. This is all topped off with messy dark green hair (almost matching his eye color!) that can look almost black in certain lights.

Izuku Midoriya was born on Erde Nona, a completely normal boy, devoid of supernatural abilities when other children in his community were developing powers known as Quirks. Desperate still to emulate the heroes he was watching save the Crossroads, he became obsessed, keeping a notebook full of all the info he could find on local super-powered people or heroes of other various kinds.

At last, at the age of 15, he was gifted a powerful Quirk called One for All by a mysterious individual. The power allowed him to exponentially increase the strength of his physical body, but he is still not fully in control of it, and so greatly risks his health and safety any time he uses it at a higher percentage. However, with this newfound power, he was able to enroll in a local academy that trained heroes, UA, in order to try and work to get his body and mind in shape enough to control his power and be the hero he’s always dreamed of being.

Izuku was born Quirkless but then mysteriously given a powerful Quirk called One For All that, when used fully and properly, greatly increases his natural physical ability. He has trained for months to be in peak physical shape to be able to use basic applications of this power at will, though he has a long way to go before he can access its true might.

Izuku has the ability to manifest the effects of One for All into his arm, resulting in a devastating uppercut capable of knocking enemies flat. However, he currently isn’t able to balance the impact with what his arm can handle, and if he uses it at 100% power, or really anything higher than 5%, it has the potential to break his bone.
Relentless Fanboy (400)
Master Skill: Knowledge (Hero Skills) Rank 4 (200)
Master Skill: Knowledge (Tactics) Rank 4 (200)

Izuku is a fuckin' nerd. He keeps a notebook of all his observations on heroes and all his musings on strategy, and as they say, writing something down helps that stuff bleed into your mind so he's got a lot of information pretty handy.
Last edited: Jul 31, 2020