Physical Tendencies (Total should be 100%, only multiples of 5% please)

Personality Tendencies (Total should be 100%, only multiples of 5% please)

Agility - Rank 1 (200)
Incredible Heat Environments (100)
Incredible Cold Environments (100)
Radioactive Environments (50)
Need for Sleep (50)
Chemical or Toxic Environments (50)
Disease (50)
Falling (100)
Non-biological Anatomy (Your organs aren’t where they ought to be, or don’t matter) (300)
Immune to Pain (You still take damage, you just don't feel it) (200)
[Further Abilities to be Unlocked]
Total Cost: 1,200 Essence
Description - As a conceptual magical construct, Little Ghost's strange and unnatural anatomy is little more than a shell around his true essence, the shadowy primordial goop of existence itself. . As such he is conceptually immune to quite a few things and able to eat nearly anything. The way that Little Ghost's body moves, and the fact that it does not follow conventional anatomy allows it to do various feats of acrobatics without issue and "digest" anything that Little Ghost can fit inside his mouth or take a bite out of.
Name: The Pure Nail, Stage 1

Description - A weapon from an ancient age, Little Ghost can not remember where he procured it, or when he had the time or knowledge to repair it. For it is the same nail he has always carried, repaired as though it may be. He can feel it in the very core of his emptiness.

Wielded instinctively, a Nail is hardly more effort to swing than ones arm. And sized for an insect-man-thing of some four feet in height, this little weapon has but a reach of two and a half feet, four feet when considering Little Ghost's arms. It is obviously something organic, and yet it is harder, sharper, and tougher than any blade made out of metal. For the weapon resonates with the soul of its wielder and the more in-tune they are, the greater its powers and conceptual weight.

Given Little Ghost's current state, it has much room to grow.
Name: Age of Kings 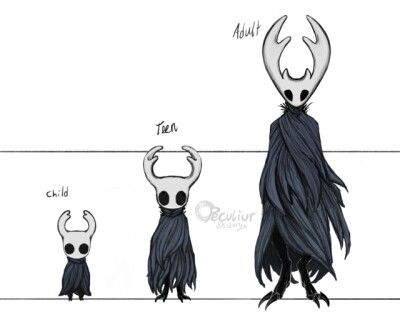 Description - Accessing his own self through all possible timelines, bridging the gap through the King's Brand upon his brow, Little Ghost grows into the form of his adult self. Leaving his "teenaged" form behind, Little Ghost grows to a staggering 8 feet in height, his horns growing to a 17 inches in length. Growing proportionally this more than doubles the reach of his Pure Nail as the weapon grows at the same rate with Little Ghost. The end result being, as far as the Pure Nail is concerned, that the weapon acquires a blade length of 5 feet, and an additional reach of 3.5 feet due to his arms, making its total reach 8.5 feet while Little Ghost is in his Adult Form due to Age of Kings.

Growing to his adult form is a permanent shift and it takes 1 minute of concentrated effort. Reverting to his "teenaged" form is an equal 1 minute process. Due to this being a permanent shift until reversed, all posts should be tagged with Adult Form whenever Age of Kings is active.
Master Skills: