Character Behavior:
Nico Cinder is an Infernal Punk. Prior to being given demonic supernatural powers, Nico was a small-town burnout with a penchant for recreational drug use. He is no stranger to fighting, both for his life and other more self-absorbent reasons. He's aware of how the pointy end of a knife (and gun) works, along with a very improvisational "bar brawl" attitude to fisticuffs. Insults and other "morally creative" tactics that benefit from his cunning are common. Loud in a fight, calm in conversation. He is confident, only just cocky enough to be cute instead of an idiot. He's not fond of overly authoritarian figures, including his demonic benefactor. Nico was gifted latent supernatural powers that he often makes use of during battle. Sometimes things fire off incorrectly due to inexperience and a lack of control - a common theme in all of his battles, be they literal or metaphorical.

Nico "Cinder" Cimber is in a young adult human male in an indistinguishable spot of his early 20's. He is roughly 5'10 (give or take, he claims), often dressing in baggy street clothes (i.e. ripped jeans, hoodies, etc.) that swallow a rather ordinary frame. He has several bits of metal planted in various parts of his body, including rings on his eyebrows and studs and danglies in his ears. His shaggy raven hair just barely misses the knape of his neck, but manages to fall in front of his eyes if he isn’t careful. Permanent scrawlings and doodles cover his left arm, left by his own hand as he taught himself how to tattoo. His initials are also written in ink with a calligraphic flair just below his right eye.

Nico Cimber was convinced the universe had it out for him the moment he was old enough to comprehend the terms and conditions of his existence. He was born into a family that frequently danced back and forth across the line between "lower-middle class" and "worse off than average." He doesn't have many memories of his parents, save that his father was older than most and managed to survive a war, though he can't remember which one. His mother is even more of a mystery. He remembered seeing or hearing something about her moving to Minnesota some odd years back, and had always planned to try to track her down one day, but as of yet has not figured out how to make the journey feasible. Come to think of it, there are a lot of holes in his memory - and not the drug-induced kind.


Here is what he remembers:


He remembers working as a cook for several years, and hating every second of it; until his bandmates showed up. One string at a time Fate's tapestry wove itself into place, bringing Joey and Jack to Nico and expelling the three of them from their lives in...

What was the name of his hometown? His head was pounding, almost forcefully steering his thoughts away from the topic.

He remembers working in a local tattoo parlour after that, starting his own family with the friends he had made there and up until this point. He remembers falling in love with the sound of a guitar singing and forming a band with his inner circle. He remembers the agony of having loved ones disappear, willingly and otherwise. He doesn't remember many names, mostly faces, and words exchanged.


He remembers weed, whiskey, LSD, and the comfort of his friends in close proximity. It was that last bit, of course, that landed him in so much trouble. He was expecting trouble, where he was going - he usually does, at this point - but he wasn't quite sure what kind. Lastly, Nico remembers going on a very long drive with Joey and Jack. They were to be meeting with someone important, but even now the memories of that intersection in Clarksdale, Mississippi are draped in fog. There was a handshake, a convergence of wills. Perhaps there was a signing of wills as well. After the deal was made official, Nico had questions, naturally.None were answered.

Instead, the ground fell away beneath his feet.

Nico Cimber doesn’t remember his last name is Cimber. He'd taken to claiming “Cinder” as his family name. He thought it was pretty metal, all things considered. He wanders this universe until further notice.
Last edited: Jan 7, 2022

Hell has claimed Nico, for now, and has allowed his body certain privileges as a mark of status, like some fancy footwork and radical abs.

This is it. It's THE ONE. A legendary artefact, right here. The SAME guitar that was busted across the sweet angelic face of Sutor Woriya themself. Shudder in fear, ye mortal morsels, for Nico Cinder is coming to melt your faces off. The guitar functions as a normal acoustic guitar would, but when it senses negative emotion, like anger or despair or the like, it roars with the intensity of a thousand angsty teens. Never underestimate the power of music - Nico can whip up a sicknasty riff, I mean he can REALLY put those power chords to work, man. So much so, in fact, that allies within earshot of his grindy, dulcet tones are inspired to ignore the weight of their sins and armor. It takes a little time to start ripping and tearing into the notes, though, say about ten seconds into a song for the effects to take place. Further more, it IS just a guitar. It can be broken, stolen, and fall prey to other unfortunate fates. In fact, sometimes Nico smashes it just for funsies. Eventually, it poofs back to him in a puff of embers and smoke. Allies affected move like people possessed. Possessed by the power of ROCK. They ignore their aching, torn-up flesh prisons and fight harder than their means would normally allow. Open up that fucking pit.

Nico’s Skateboard is average as far as most boards go. It functions as a typical skateboard would. Curiously, it rides perfectly well without griptape, which allows any who gaze upon this mastercrafted board to admire the black wood the deck was cut from. The word “Occedia” is carved in white script on the right side of the board parallel to its edge. The board can be broken like any old hunk of wood, but will respawn within a matter of moments in a cloud of embers and smoke, complete with different, fresh as fuck deck art.

Occedia is a made up word loosely based on Latin that loosely translates to "Fading Light", but don't tell Nico that.

He has yet to master the skill, but the board has several transformative properties and counting.

Ah yes, the Motherland’s Workhorse. To activate this form of the Occedia, Nico simply needs to dismount, hold the board by the trucks as one would a rifle, and point it at things you want to stop moving! The board twists and contorts into the shape of the revolution at will. The wooden stock is the same dark shade as the deck of the board. Nico is still learning the ins and outs of turning skateboards into revolutionary weapons, so sometimes the damn thing jams, along with a slew of other technical problems that pop up more or less at random. 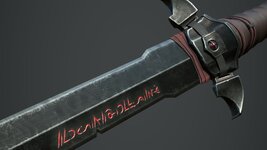 “BAP! Is the sound your fucking face makes when I bounce this shiny piece of metal off of it, bitch.” - Nico Cinder

The buckler and poker transformation occurs when Nico pulls outward on the board’s trucks, as if he were trying to tear it apart in the most inconvenient way possible. Upon enough force, the board separates into two pieces naturally: a sword and shield.

The shield is of the smaller variety, a buckler in the shape of a hexagon. Primarily used in close combat to counter and parry, the shield could possibly be used to block small projectiles provided Nico has the wits and reflex to catch them. The front of the shield is painted in matching style to whatever deck art was on the board when it split.

The sword is barely a sword, but too long to be considered a knife or dagger. It was crafted in the form of a Roman Gladius, 22 inches long from hilt to stabby end. The blade is made of a black metal, the hilt wrapped in dark leather.

Bearing these relics is...taxing, to say the least. The shield gets warmer and warmer the longer it stays on his forearm, never quite getting hot enough for the pain to be excruciating, only very uncomfortable. It almost reminds him of getting tattooed. (Side Effect)

As with the shield, if he holds the poker for too long, its curse makes itself known. A nasty cut will form on the palm of his hand. If Nico continues to ignore the warnings, whispers and murmurs begin to pour out from the weaponry that only he can hear. At the curse’s strongest, Nico’s arms will become mostly numb until another transformation occurs (I.e. he can use them to perform basic actions, but fighting and other technical abilities will be greatly hindered)

Not sure if you knew, but the devil smokes cigarettes. He happens to own a handful of shares in most major tobacco companies. Nico's Hellfire Cigarettes are nifty little things that he can puff on, like any old other cigarette, except these have a bit of extra kick to them. After taking a moment to light the square and have himself a healthy drag, (Activation) Nico may either exhale a short range burst/cone of flames in a shotgun-style spread, or simply flick the unfinished cigarette. If Nico didn't give 'em the old dragon's breath, the flicked death stick remains charged with volatile hellfire, exploding into inferno at the slightest contact.

The explosive power of hell is unruly, and when the flames come out of Nico's throat, it does indeed burn something fierce. He'll have a hard time screaming or even communicating verbally for some time afterwards, which essentially renders the Red Chord's buff useless until he gets something to drink or some other reprieve. "Chainsmoking" (Chainsploding?) will physically injure Nico to varying degrees of intensity dependent on context. (Side Effect)

Furthermore, flame knows neither friend or foe, and while Nico can somewhat aim the exhale, allies caught in the explosion from a flicked cigarette will likely not be spared. (Indiscriminate)

Considering this power comes straight from down below, holy artifacts, energies, and beings from various faiths are naturally resistant to the fires of hell. (Weakness: Holy)