Character Behaviour​
Obake is a Wary Undead.
Being wary, it is cautious and shy, loathes taking risks, and has a hard time trusting others.
As an Undead, Obake uses twisted and unnatural powers that rip the veil between life and death or otherwise break the laws of nature, as well as curses. Abilities of this kind are heavily regulated or outright forbidden by most modern civilisations. 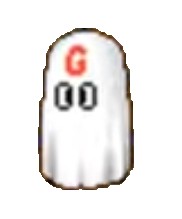 Obake looks much like a kid's cheap Halloween costume - a white sheet with eyes looking through two holes, and a "G" on its forehead that probably stands for ghost. Without arms, and just floating along the ground instead of having legs beneath that sheet, it quickly becomes apparent that there's more to it.
Were someone to peek beneath the sheet... there is nothing there. Not even a floating ball or something to hold the sheet up.


Personality​
Obake's uncertainty about just about everything, down to its very own existence, has made it a creature both fearful and curious. It has many questions to which it hopes to find answers... somehow. Was it always a ghost, or is there a time where it was something else, which has been erased from its memory? And yet, can it trust what it finds?

The words are the biggest mystery. Is it - Obake - a mere construct and the words it finds shape it? Is it effectively grafting parts to itself and assimilating knowledge and powers that are not its own? Can it trust those hazy memories to be its own, or are they of someone else's mind - or pure fabrication? Or are the words pieces of it, and it somehow exploded, scattering those pieces everywhere? Is it re-assembling itself, like a broken puzzle, each word a part of the whole? And most importantly: who did this? Is it the actions of a cruel mastermind watching it for entertainment? Were the words left by someone and it is coincidentally finding them? Did it do this itself?

Obake seeks to have these and many more questions answered, and is ready to use what it is given. Even if the powers conferred by the words feel 'wrong' to use, choices are the privilege of the powerful.

Character History​
Obake's tale is a very odd one. It's not even certain if it always was a spirit.

Its memory only goes back to a time where it had no body, no senses, nothing at all except a mind that could think and do nothing more. So it had spent its time thinking. This, somehow, had led to it collecting words. Words of power, words with meaning, words that shaped it. The first one it remembers finding was The Mind, long ago. Or maybe not long at all, it’s hard to attach time to that state it was in. There were more, but the most recent one it got was The Ghost. Then it came to be as it is.

There are vague memories after that. A graveyard, an old woman screaming ‘Obake!’ and holding up something that shone brightly with a horribly painful light. It recalls little of what happened next, it only knows that it escaped. And now?

Now, after taking the first word that it heard as its name because it has nothing else to go with, Obake wanders the land in search of the words. It believes that the words are important somehow. Very important. That something will happen if it finds enough of them, and that it will somehow be able to find more if it searches. Maybe there will be answers and explanations to who it is, what the deal is with the words and who is responsible for all this. And hopefully it will be able to find a word that lets it become something that has less of a stigma attached to it. You would too, if you were the staple monster of fairy tales told to scare children straight.
Last edited: Aug 31, 2022

As a spirit, Obake is particularly susceptible to faith-based wards, divine energies and the like. A number of cultures and faiths, even amidst the more tech-inclined planets of the Crossroads, have rituals and forces that ward away, weaken or even destroy evil spirits. Several of Obake’s moves have a Weakness called “Blessing” or ”divine force”, this list acts as an explanation for the umbrella term.

“Blessings” refer to various forms of sanctification, consecration, blessing, hallowing, wards and protections that the people of the Crossroads practice as part of their faiths and beliefs in the divine. There are three broad categories to which such a power can apply:

The living and the dead. Examples include a deceased that was given funeral rites or someone who recently received a blessing by a cleric. Saints and Paladins also wield holy power.

Items. For instance a symbol of faith worn by a believer, or a basin of holy water.

Areas. This includes locations like the hallowed grounds of a church or monastery, a graveyard, a sacred site, a home with warding glyphs and runes or even a circle of salt. As a rule of thumb, the smaller the protected area and the stronger the faith associated with the wards is, the more effective they will be.

The effectiveness of such sanctifications decreases with time if not maintained: old ruins and the like are unlikely to still affect Obake if there has been nobody around for years. Likewise, the intent is important: consecrations and blessings performed by someone who does not genuinely believe in their effectiveness will not work, even if everything is done by the book.
Spirit I (400)

As a spirit, Obake is all but immune to several things that plague the living. Heat and cold, a lack of air and drops from any height don’t perturb it... except if it is subjected to a blessed item or enters a hallowed ground. In that case, it is weakened and stripped of its immunities and has to breathe until it can recover its strength.
Spirit II (400)

Lacking the organics of a human makes Obake naturally immune to such things as the noxious gases of swamps or the local chemical waste dump, nor does it need to sleep. It only needs to eat and drink to sustain itself... how it goes about that is a different tale. (Unlike Spirit I, the adaptations of Spirit II are not stripped from Obake when being subjected to divine power, as they are innate to its body)
The Haunt (975)

Obake has the innate power to possess another creature by draping its sheet-like body over them and enveloping them completely. It can then suppress the original owner and control their body, or share control with them, until it leaves their body.
(Player characters, Summons, Important NPCs etc. require their owner’s consent to be possessable).