This is where you offer your services to purchase various Coin related things for others. This thread is also used to make requests of those with open shops. Remember: this requires a 500 word roleplay from each of you to make "official".

Shopkeeps: list your Perk(s) and what World you generally stick to. When/if you take a request, post in this thread stating so.

Customers: give a description of what you want and where you are. If you prefer a particular shopkeep, list their name as well.

Hoodwink’s Apothecarium
Size III Stationary Base
Location: Karim, Mesa Roja
Size: 5,000 sq. ft.​
Services/Perks Offered
​
Master Skill: Craft (Potions & Poisons) - 1,500 Essence
Master Skill: Subterfuge (Black Market & Smuggling) - 1,500 Essence
50% Consumable Discount
An accomplished apothecary, Conrad’s focus is on the development of rare and crippling poisons, which he applies to both of his weapons in dangerous situations.
An accomplished black marketeer and smuggler, Conrad has an extensive network of connections throughout the Crossroads to obtain any other items one could require.

Master Skill: Driving/Piloting (Spacecraft) - 300 Essence
100% Transit Discount
Conrad has been running smuggling missions since he could see over the dashboard, and he often uses his stealth ship to smuggle others, or himself, onto other worlds. For the right price, he will also perform routine transit.

Conrad's pilot is willing to make deliveries to the world of your choice for all consumable purchases, free of charge. 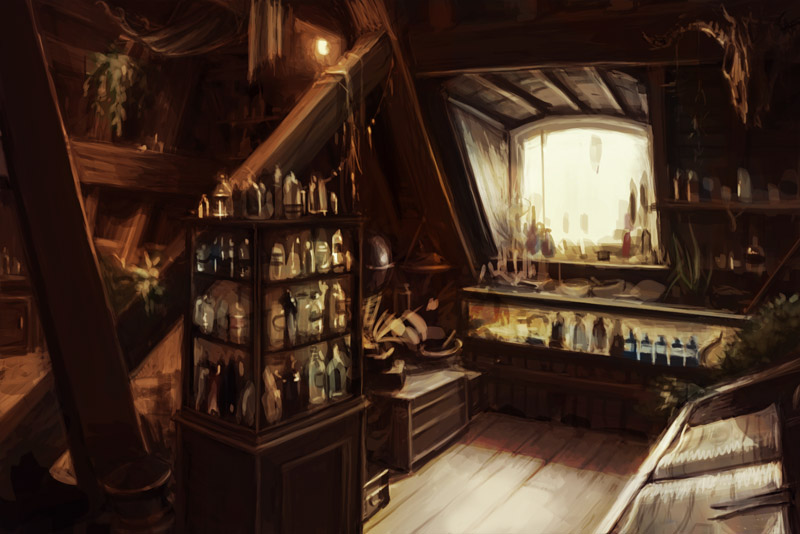 Hoodwink’s Apothecarium is a dingy storefront in one of Karim’s crowded market districts. Inside, a small and dimly lit room offers innocuous potions, salves, and tinctures of all sorts, run by a single shopkeep and seeing very little foot traffic. However, concealed beneath the shop in an extensive basement is Conrad Jamboy’s private quarters and his apothecary lab, where he develops insidious poisons available to the highest bidder. Those entering the Apothecarium seeking illicit substances need only mention the passcode: ‘One pain is cured by another.’