Mewtwo
"We dreamed of creating the world's strongest Pokémon, and we succeeded." -Dr. Fuji​

Character Source: Pokémon (specifically the 1st movie, "Mewtwo strikes back" and its prequel, "The Uncut story of Mewtwo's origin")

Skill (S): 30%
While its genetic parent Mew is an extremely balanced Pokémon, Mewtwo's tendencies are geared more towards power. To utilize its psychic abilities to the fullest it prefers to stand still and rely on defensive techniques to repel attacks while it concentrates and focuses its efforts on attacking.

Support (S): 20%
Mewtwo is said to be the Pokémon with the most savage heart, though it learned to control its wild and destructive tendencies. The developments on New Island (during the first Pokémon movie) further reduced its aggressive personality. Mewtwo also has some experience as a Pokémon trainer and thus at supporting its allies.

As an artificial Pokémon created through horrible cloning and DNA scientific experiments, Mewtwo bears a certain likeness to its genetic parent Mew, as its name implies, yet at the same time it is greatly different.

It is a bipedal humanoid creature bearing some feline features, most notably the shape of its legs and its large tail. Its other notable features include the two short, blunt horns imitating cat ears, its large purple eyes, its twin spines manifesting as both a regular neck and a tube reminiscent of a teacup's handle that extends from the back of its skull to the nape of its neck, and its three digits on both its hands and feet. Unlike its pink-skinned parent, Mewtwo's skin is colored gray and purple.

While its tail and head are well developed its neck, chest and arms are thin and regressed as a result of its DNA being tampered with, as the scientists who made it focused on its psychic powers rather than its body. This is also why Mewtwo has two spines.


Personality​
Mewtwo's character was shaped in large part by its first interactions with humankind after its birth: the scientists that saw it as the results of their experiments instead of a person, and the leader of Team Rocket, Giovanni, who claimed that Mewtwo's destiny was to serve humans. As a result it developed a deep hatred for humans and by extension to the 'pathetic' non-clone Pokémon who it viewed as slaves to its trainers.

When Ash interferred in the battle between Mew and Mewtwo only to be petrified and subsequently healed by the tears of the Pokémon around the island the clone Pokémon had a change of heart and admitted that the circumstances of one's birth were irrelevant. Ash Ketchum remained an exception however: Mewtwo still holds a deep-rooted dislike for humankind. It is far more comfortable around Pokémon and other non-human creatures.

Being created as a one-of-a-kind Pokémon and experiencing world only as a full-grown adult Mewtwo has also not experienced a lot of things others would consider natural, such as physical affection, childish playfulness, friendship and many others. Being born strong it also does not know the feeling of being weak and by extension the lack of responsibility. This has led it to be childishly curious about the world and its inhabitants at times, and socially awkward due to inexperience.
Last edited: Sep 26, 2018

History
​
Mewtwo woke up in the stasis tube of a laboratory belonging to the scientist Dr. Fuji, who explained to it that it was a clone of Mew created by humans and enhanced to be more powerful than its original. Being treated as not a sentient being, but an experiment, Mewtwo became enraged and destroyed the laboratory. Shortly after Giovanni, the leader of Team Rocket, made his appearance and offered Mewtwo to help it learn to control its powers, speaking of partnership. For weeks Mewtwo assisted Team Rocket with its powers but it couldn't find an answer to its most pressing question: What is my destiny? Why am I on this world? When Giovanni told the clone Pokemon that its destiny was to serve humans and that they could never be equals, let alone partners, Mewtwo blasted away and in its rage vowed to find out its destiny and, in the process, wipe out all who opposed it.

After building its fortress on the very island that had once housed Dr. Fuji's lab it invited several powerful trainers, including the protagonist Ash Ketchum, where it displayed to them the superiority of clone Pokémon in three mirror battles that the clones handily won. It proceeded to steal the trainers's Pokémon to create more clones and announced that the planet would be destroyed by the storms it summoned, with only the clones remaining safe as they had earned the right to live by proving themselves superior to regular Pokémon.

That was when Mew, Mewtwo's 'original' and thus its genetic parent, appeared on the scene. Mewtwo decided to prove once and for all that clones were stronger by defeating its original, and engaged it in a fierce battle. The other Pokémon and its clones battled everywhere on the island while Mew and Mewtwo clashed repeatedly, until Ash interferred but got caught in the crossfire of Mew's and Mewtwo's powerful beam attacks and subsequently was turned to stone. Deeply saddened at the loss of its trainer Pikachu began to cry, moving the other Pokémon and clones to tears and magically reviving Ash as these tears came together. Deeply moved by this scene and through it the realization that the Pokémon's true power came not from their strength but the heart, Mewtwo admitted that clone or original, strong or weak, born or created do not matter, only what one does with their life. As it flew away with its cloned Pokémon and Mew it wiped the memories of everyone involved for the better of all, and stopped the catastrophic storms.

Where Mewtwo went, only its group would know. They departed to an isolated area known as Mount Quena where Mewtwo aimed to look back and rethink its life and destiny while giving its clones a safe place to live... but it did not arrive there.

Instead it found itself whisked away to a new world.
Last edited: Sep 26, 2018 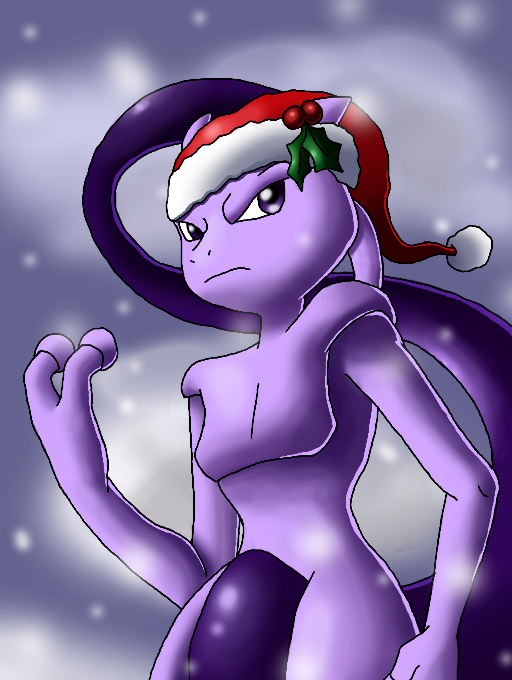 Obtained as a gift from one of the elves of "Saint Claus" in exchange for a little aid with present delivery, Mewtwo can wear this hat to grant itself a magical resistance to cold environments. However, since it really doesn't go well with the Psychic Pokémon's otherwise dark aura, Mewtwo only puts it on when it is really necessary.

Telepathy
Being a Pokémon Mewtwo cannot say anything other than "Mewtwo" with its voice. Instead it uses telepathy to transmit what it wants other people to hear to their mind. While this does not require the other party/-ies to have a Communication Device of their own, its reach is limited to ~1km and requires Mewtwo to see the person directly. Despite it being genderless, Mewtwo's mental voice is masculine.
Fluff: Outside of using it in a targeted fashion Mewtwo can also 'broadcast' its thoughts so everyone within hearing distance can hear it - as if it were speaking, basically. This form of Telepathy is subject to the same limits as speech (walls can stop it, other sources can drown it out, others can eavesdrop on it) and can even be heard/recorded by machines like a video camera or a microphone.

By applying its psychic powers to itself Mewtwo is able to levitate and fly around freely. When using this Mewtwo's eyes glow with a bright blue color, or it surrounds itself with a blue flame-like aura. 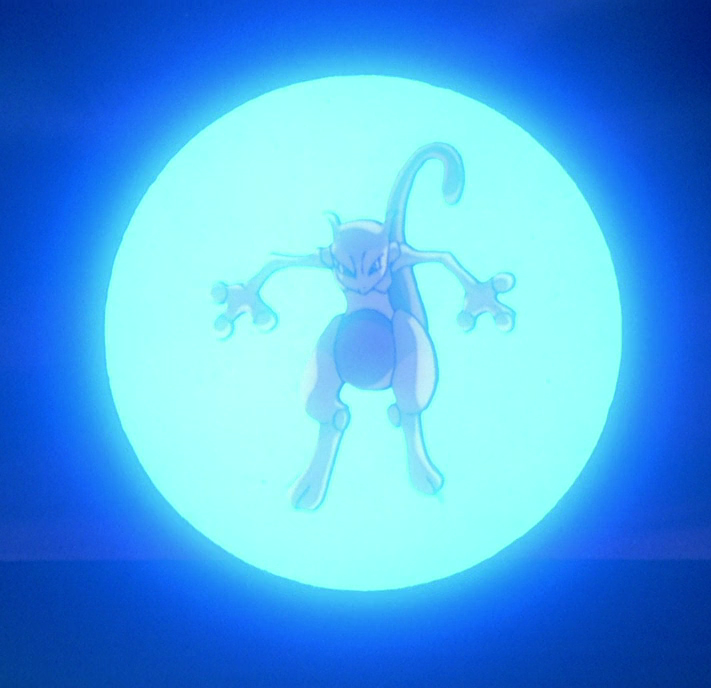 A psychic-type move known to a relatively small number of Pokémon, Barrier features in both Mew's and Mewtwo's movepools as a powerful defensive ability. Mewtwo erects a bubble of psychic energy around itself, forming a gapless wall that repels physical and immaterial attacks alike.

To maintain the force field-like structure requires constant concentration Mewtwo needs to focus a considerable part of its brainpower into it. Further, Barrier works both ways: any projectile-type attacks Mewtwo would throw while it is up would just hit the Barrier’s inside (such as Shadow Ball), so it cannot use them. It can still use indirect attacks that do not appear as projectiles, however.

A Ghost-type move that a surprisingly great number of Pokémon can learn. Mewtwo briefly focuses its energy into a black sphere the size of a melon and throws it forward using one or both of its hands. It is its preferred method for direct attacks at range.

A Shadow Ball uses the ‘mischievous’ energy of ghosts and spirits that it is made of to deal damage. As such, it retains the Ghost-type weaknesses of the Pokémon world: individuals that are more malicious or straight-out evil or that would otherwise qualify as a ‘Dark’ type in the Pokémon world take vastly reduced damage from Shadow Ball. In a similar vein, creatures and individuals that would qualify as a ‘Normal’ type in the Pokémon World (most commonly ‘regular’ animals, ‘normal’ people etc.) are immune to Shadow Ball.