This is a scrolling ticker line using pure CSS and HTML! This ticker system comes included as part of all Nulumia themes.
You can customize these lines in your admin panel, works purely off Style Properties!
You can even add links, and other HTML markup! Responsive and customizable.
Menu
Log in
Register
Install the app
You are using an out of date browser. It may not display this or other websites correctly.
You should upgrade or use an alternative browser. 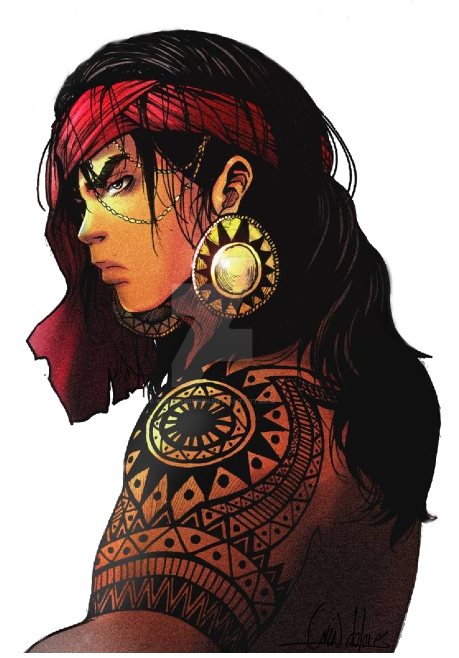 Shinku can often be seen, noticeably by his black disheveled medium length hair. He stands moderately short for a 25 year old man having broad shoulders and lean, tapered body. He has a dark tanned skin with most of his upper body being covered with black tribal tattoos but are mostly hidden under his usual ragged outfit. His eyes are dark brown when exposed to a bright light with a noticeable diagonal scar just beside his left eye.

Shinku is a Vengeful Assassin. Most of his actions, if not all, are driven by his thirst for revenge. He rarely interacts with people and is very much elusive in any relationship that might turn into a deep bond. He would only converse for the sake of acquiring information and would work simply for his continuous survival. He only views everyone around him as tools that he can use for his pursuit of vengeance.

As an assassin, Shinku mostly avoids direct confrontation as much as he can. His ways in combat are more commonly referred to, as dishonorable as he subdues his victims through a covert and speedy manner. He carefully plans each assault mostly even weeks before confronting his target. When confronted in battle, Shinku would mostly choose to escape as long as he can especially if the opponent does not pique his interest.

Shinku was born on a now forgotten and abandoned village, hiding within a floating island somewhere at the east of Kirden Wharf. Once, the place was inhabited by villagers who are mostly farmers, miners and blacksmiths living in a rather ancient culture. They are mostly known however, for the practice of the shadow arts and their blacksmiths being able to imbue magic into the weapons they forge. With the magic being a forbidden art in the whole of Opealon, this tribe decided to hide themselves deep in a luscious tropical rain forest.

For years, the village has lived rather peacefully as the whole island itself has already been abandoned by other civilizations due to unexplained anomalies that makes most part of the island pretty much uninhabitable. One day however, after one of the village's traditional feast, its people was surprised with an attack from an unknown band of marauders. With most of their warriors drunk from the night's feast, the people wasn't able to do much to defend themselves. Although somehow being able to put up a fight, they were easily subdued by their assailants, who seem to posses weapons with designs that were noticeably from the village itself.

The marauders razed their houses and slaughtered every people, old and children alike, seemingly aiming not to leave a trace of its civilization. At the edge of town however, a woman was able to somehow escape with her child through a small trapdoor built by her husband. Some of the marauders were able to notice the woman as she runs for her life outside the village walls and deep into the forest. She was hit by a poisoned arrow which was shot by one of the raiders who then commanded for her pursuit.

The woman was able to go deep into the forest however, her strength starts to fail her due to fatigue and the effect of the poison. She then decided to hide her child into a thicket commanding the child to be quiet no matter what happens as she slowly walks towards a huge tree and lay just beside it. The marauders where finally able to catch up seeing the lady lying beside a tree trying to catch her breath. The boy can only watch hidden in a thicket as one of the men approach his mother. Mercilessly, the man raised his spear then stab the defenseless lady right into her heart. The boy was frozen in fear and agony as men drag his mothers body with them towards the village.

The boy, who was actually Shinku, remained frozen until the men finally disappeared from his sight. Shinku stayed in the forest, for a few days with the thicket where he was hidden serving as his shelter. It took him a while before he can gather the courage to go back to the village where he was born only to witness an even more terrifying scene. At the center of the village was a mountain of burnt bodies piled up. He wailed for almost an hour then composed himself in an oath to hunt for the ones that are responsible for the genocide of his peers and family. Unable to salvage anything usable from their village, Shinku still decided to start his journey in an aim to get stronger and seek for the revenge of his people.

Shinku covers himself in darkness, concealing his appearance, any sound he can make, and his scent making him undetected by sentient beings around him.
Essence Cost: 2000

Descriptor: Shinku wields a black steel 60cm katana that he got from his father as a gift while still a child. The katana is able to inflict poison to whoever is cut by its blade. With the help of a merchant, his blade was forged to become sharper, dealing an even more slashing damage as its old form. Similarly, the sword's power has been enhanced, producing a more lethal poison.
Essence Cost: 500

Shinku steps into his shadow, warping out of reality then reemerging at any point within 6 meters of his original location.
Essence Cost: 600

Once aided by the power of a mystical ring, Shinku was later able to absorb the dark gem's power to grant him superhuman agility. Moreover, the assassin of shadows was granted the ability to traverse the ground in a faster pace than normal beings. Also, he is able to detect the number of sentient beings within 675 feet around him, along with their movement. Each being has their unique signature but identifying those signatures would require him to be able actually meet the target first before accurately knowing who each of the beings are. His sense can go beyond the physical barriers of the place.
Essence Cost: 3250

Shinku owns a pair of earrings, gifted by a merchant on Opealon. Both earrings are adorned with a green emerald-like gem, that holds an ancient power. It is said that the magic of the gems latch into the soul of the one who wears both the earrings. When the host dies, the power of the gem then recreate the host's body and pull its soul back from the abyss. Once the whole process is done, both the gems shatter leaving the pair of earrings merely a decorative accessory.

Hailing from the shadow realm, these ethereal horses are hard to tame except for those who are already practitioners of the shadow arts to whom they are mostly drawn to. Their bodies are entirely coated with black fur, having purplish black manes. Dark flames stream from each of their fetlocks, which are believed to help them run with incredible speeds almost double the average speed of normal horses and could even be faster if trained. Moreover, these horses can launch themselves in the air as if running on a concealed floating road. They could hide their presence by concealing themselves in the shadows, undetected by any sense. When agitated, they can hurl devastating shadows energies to their targets.

A hand-painted clay amulet inlaid with a shimmeringly smooth labradorite gemstone. The primary stone almost seems to glow, a gentle greenish-blue light emanating from it, and a much smaller labradorite bead dangles from the bottom. Reez mailed it to Shinku, forever grateful for his brief time serving as her protector. The letter she sent with it detailed the amulet’s mystical powers.

When worn, the amulet causes a subtle blue aura to drift around the wearer like a ghostly shroud. So long as the amulet is still worn around Shinku’s neck, it will help to mitigate the effects of most major attacks. In addition to this, the amulet has a subtle healing effect, managing to stitch up damage equivalent to minor knife wounds. This amulet can be removed by Shinku voluntarily or forcibly cut from around his neck.

​
1. Shinku is more of a passive conversationalist so he would not (most of the time) start off a conversation. He would simply respond out of respect if someone does talk to him. He is secretive so expect him to give false information when being asked of personal matters including his name. So be mindful of the details that he would give you IC.

2. All the threads that I make are basically open unless marked as completed so you may just reply to any thread I have, even unannounced. I rather enjoy surprises. Although my ask is that you kindly read how the story is already unfolding so that you may reply according to the story line.